On Monday, November 4, the U.S. Department of Justice sent a letter demanding that Hachette Book Group not publish A Warning without first providing evidence that the book’s author — an unnamed senior Trump administration official — did not violate a nondisclosure agreement and did not have access to classified information. The unidentified author first made headlines in September 2018 when the New York Times published the author’s op-ed, entitled, “I Am Part of the Resistance Inside the Trump Administration,” anonymously. 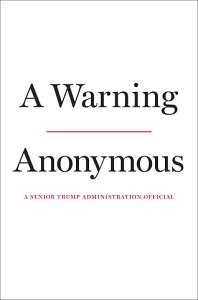 Despite the letter, Hachette reaffirmed its commitment to the author by saying in a statement: “Hachette has…made a commitment of confidentiality to Anonymous and we intend to honor that commitment,” as reported by CNBC. Hachette’s statement says it is not aware of any nondisclosure agreements the author has with the U.S. government. The statement continues, “Please be assured that Hachette takes its legal responsibilities seriously and, accordingly, Hachette respectfully declines to provide you with the information your letter seeks.”

If the anonymous author did sign a nondisclosure agreement, “such agreements typically require that any written work potentially containing protected information be submitted for pre-publication review,” Hunt cautioned.

In response to the DOJ warning, David Grogan, director of the American Booksellers for Free Expression said, "We firmly support Hachette in publishing A Warning, written by an anonymous senior official in the Trump administration. The right of someone to publish under a pseudonym or anonymously is crucial in any free and democratic society.”

Grogan went on to explain that the U.S. has a long history of authors publishing anonymously. The U.S. Supreme Court has upheld the right of an author to remain anonymous, he said, pointing out in Talley v. California that persecuted groups and sects throughout history have been able to criticize ‘oppressive practices and laws ... anonymously.’ “Not surprisingly, there is a rich tradition of anonymous publishing in the U.S., from The Federalist Papers to Go Ask Alice to Primary Colors,” Grogan noted.

While expressing support for Hachette and the anonymous author, Grogan also characterized the DOJ’s actions as unwarranted. “The Department of Justice's demand that Hachette provide details about the author is a clear overreach. It would potentially intimidate the author into not publishing what could be very important information about the actions and policies of a sitting president and that president’s administration. It should be up to the public to decide whether A Warning is worthy as a book — not the government.”

A Warning by Anonymous will be published on November 19, 2019.