The American Booksellers Association is unhappy to announce that the day has finally come. After 35 years at ABA, Senior Strategy Officer Dan Cullen is retiring at the end of the year. 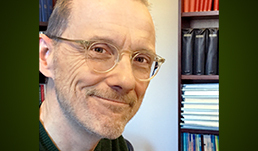 Cullen joined ABA in 1986 as editor of ABA Newswire, the printed predecessor to Bookselling This Week. Over his 35-year tenure at the association, he served as Information Department Director, Senior Director of Editorial Content, and Content Officer, overseeing publications such as the monthly American Bookseller magazine, Indie Next Lists, and many other information efforts. Cullen began in bookselling as manager of an ABA member bookstore in Massachusetts.

In his current role as Senior Strategy Officer, Cullen is responsible for helping direct ABA strategy, the association’s advocacy efforts, the annual ABACUS report, and media and press relations.

ABA CEO Allison Hill said, “I feel extraordinarily lucky to have worked with Dan during his final stretch at ABA. His decision to stay to help with the CEO transition as I started in 2020 ended up being more than he probably bargained for when the pandemic hit, but the support he has demonstrated for me, everyone at ABA, and members during the past year and a half proved to be his final extraordinary gift to ABA after his decades of service. We are grateful for his time at ABA and for the long lead time for us to get used to the idea of him not being here every day.”

ABA COO Joy Dallanegra-Sanger said that she had the distinct pleasure of working with Cullen for 10 years. “We’ve traveled to stores and shows across the country, sharing stories, meals, and drinking lots of coffee,” said Dallanegra-Sanger. “Dan’s knowledge of ABA, past and present, has been invaluable to the ABA staff, board, and me. It’s hard to imagine an ABA meeting without one of Dan’s famous analogies or his fabulous snorting laugh that everyone longs to hear. If we are lucky, he might come visit us at a Winter or Children’s Institute. From the beginning, he has been a welcoming partner whose counsel has been so important to me. Indie bookstores have been so lucky to have him on their side.”

Cullen noted that working at ABA, with independent booksellers, and in this industry “has been the greatest professional gift anyone could hope for. There hasn’t been a day that I haven’t met someone, learned something, or been able to work with a colleague that I’m not grateful for. I’ve been very lucky to have been at ABA through really remarkable volunteer and staff leadership, and I’m leaving with especial gratitude to both Allison and Joy, who have been sustained — and sustaining — profiles of what extraordinary leadership looks like. I can’t wait to see what great things lie ahead for indie bookselling.”