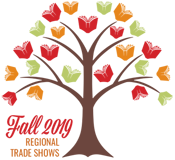 At each of this year’s shows, ABA will present the new education session “Independent Bookstore Day: Celebrate With Success,” focusing on how indie bookstores can take part in the growing annual event. Booksellers will learn how they can make the most of Independent Bookstore Day (IBD), the national celebration of independent bookselling that this year featured 575 participating stores, many of which reported increased sales and foot traffic plus a boost in brand awareness.

The 2019 fall regional trade show schedule is as follows: