This Saturday, April 27, on Independent Bookstore Day, ABA CEO Oren Teicher represented the American Booksellers Association at the grand opening of The Lit. Bar, the new independent bookstore and wine bar in the South Bronx owned by Noëlle Santos,

With this opening, The Lit. Bar becomes the only general-interest independent bookstore in the Bronx; an interview with Santos about her four-year journey to open The Lit. Bar appeared in the April 24 issue of Bookselling This Week.

“Chapter One,” on Saturday at noon, featured a ribbon-cutting ceremony where Santos was introduced by Lisa Sorin, president of the Bronx Chamber of Commerce. Special guests also included Bronx Borough President Ruben Diaz Jr., and customers partied, bought books, and enjoyed music for the rest of the day with a DJ and a photo booth. Santos noted that The Lit. Bar will be Diaz Jr.’s first stop for Bronx Week 2019, the annual borough-wide celebration.

The day “was magical. Absolutely magical,” said Santos, who told BTW the opening day crowds were so massive she already has to restock her inventory. “It turned out way better than I imagined. I felt like if I was going to take this long to do it, I had to do it like Beyoncé.”

Santos said The Lit. Bar is launching regular hours today, May 1, on Wednesdays through Sundays for the time being; the store is open Wednesday 3:00-7:00 p.m.; Thursday-Saturday 1:00-8:00 p.m.; and Sunday 12:00-6:00 p.m. After she restocks her inventory in the upcoming weeks, Santos said she will add on Mondays and Tuesdays. 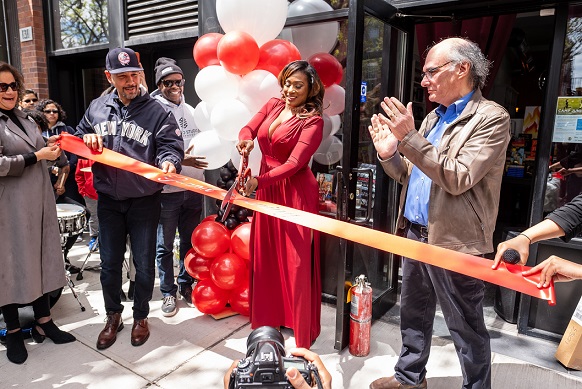 ABA CEO Oren Teicher (far right) applauds The Lit. Bar’s ribbon-cutting on Independent Bookstore Day. “I was thrilled to have represented ABA at the Lit. Bar’s official opening,” Teicher told BTW. “It was so appropriate for the opening to have taken place on Independent Bookstore Day. The large and enthusiastic crowd gathered on Saturday bodes well for the store’s success. I know how long and hard Noelle worked to open her store, and all of us at ABA wish her the very best.” 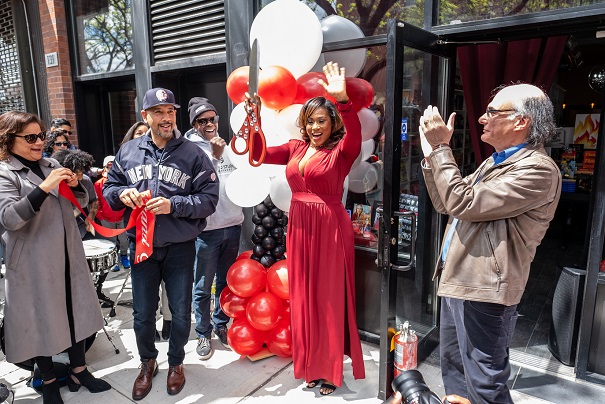 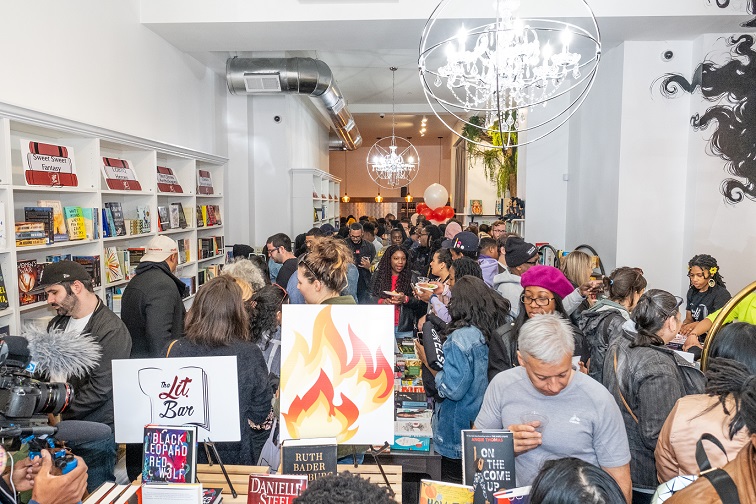 The crowd at The Lit. Bar on opening day. 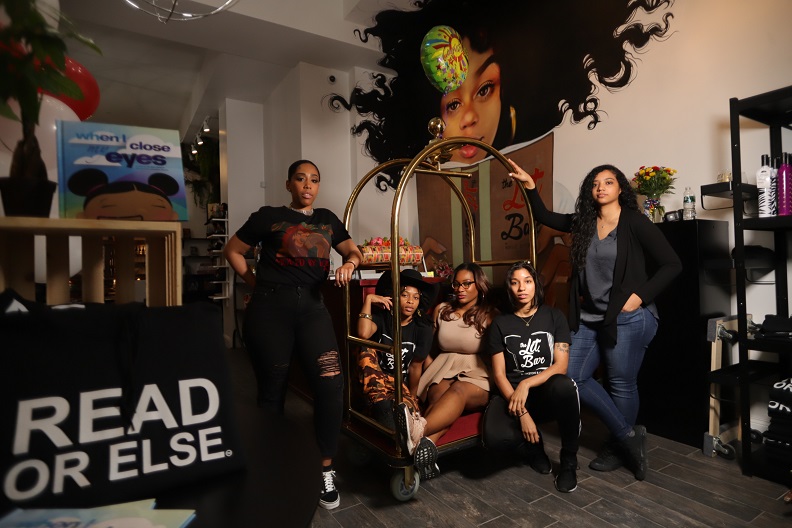 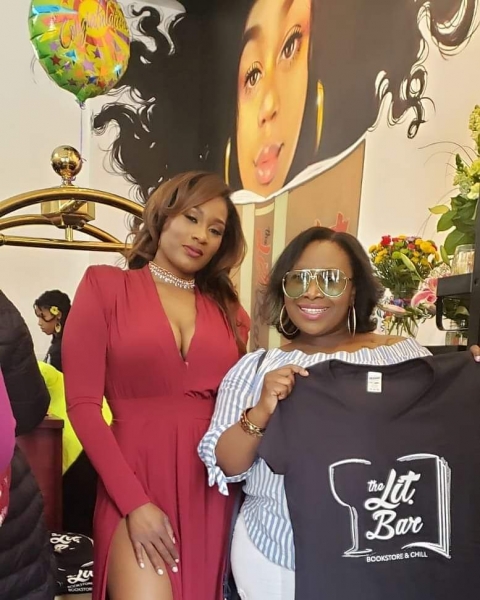 Santos and a guest. Independent Bookstore Day daytime celebrations on Saturday were followed by “Chapter Two” later that night, an invitation-only party for friends. 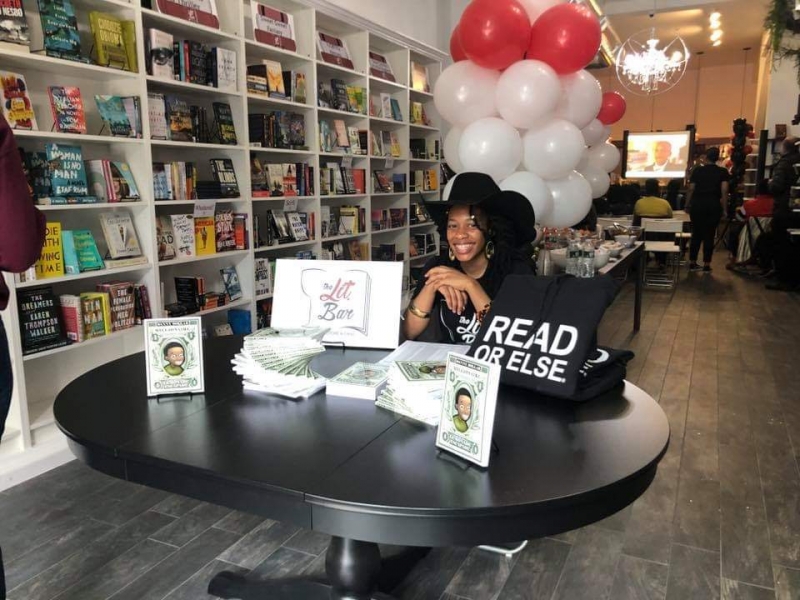 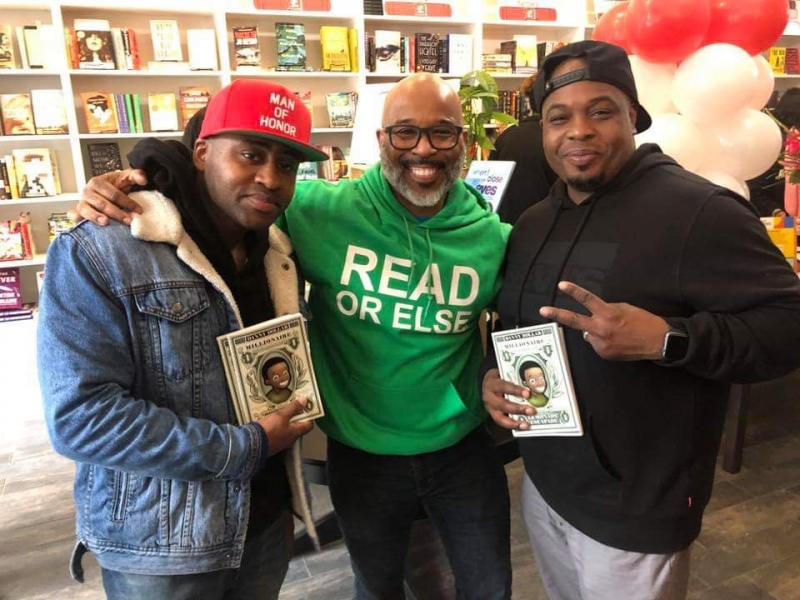 Danny Dollar Millionaire Extraordinaire author Ty Allan Jackson poses with two guests. Jackson was the featured author for “Chapter Three,” the third part of the opening festivities, on Sunday, April 28, where Santos showcased her Kiddie Lit’r children’s book club and programming arm. The day featured a giveaway and signing of Jackson’s book and a presentation on entrepreneurship, as well as a This Is My Street book kit giveaway featuring Elmo.

The grand opening event series capped off on Tuesday, April 30, with “Acknowledgments,” where Santos appeared in conversation with Forbes contributor and author Sara Bliss on “Making the Lit. Bar,” to tell her story and take questions from the audience.