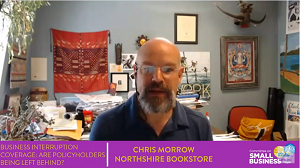 Morrow was among five panelists chosen to participate in the forum. Other panelists were Francisco Schlotterbeck, CEO of Maya Cinemas; Mark Shaker, co-founder of Stanley Marketplace; John W. Houghtaling, II, Managing Partner of Gauthier Murphy & Houghtaling LLC (on behalf of the Business Interruption Group); and Sean Kevelighan, president and CEO of the Insurance Information Institute.

The forum gave members of the committee the opportunity to hear from policyholders and stakeholders about how small businesses have tried to maximize their long-term survival in part by filing claims under their business interruption insurance policies; however, businesses have been denied nearly across the board — either because policies did not explicitly cover viral pandemics or they included viral pandemic exceptions.

“I had tried to mitigate my risk as much as possible as a business owner, but the insurance companies are clearly much better at that,” Morrow stated.

Since government stay-at-home orders have mandated many small businesses cease in-store operations, business owners have tried to file claims under their business interruption coverage. Upon denial, some small businesses have looked to the courts.

The virtual forum sought to examine possible relief for small businesses with business interruption policies that do not cover pandemics.

Morrow also took the opportunity to speak about the Paycheck Protection Program (PPP). While he recognized that the PPP was “a well-intentioned effort” to mitigate business interruption, Morrow also pointed out much-needed changes to the program. These changes include the eliminating the 75/25 rule, allowing for the deductibility of business expenses paid for with forgiven PPP funds, and extending the eight-week period.

Further, Morrow said that the PPP was too narrowly focused on just keeping people employed for two months and “not about keeping my business healthy and viable for the longer term.”

Representative Steve Chabot (OH-1) later addressed Morrow’s concerns about PPP specifically, saying the House is expecting a vote on the Paycheck Protection Flexibility Act on Wednesday, May 27. The bill would implement a number of reforms to the PPP.