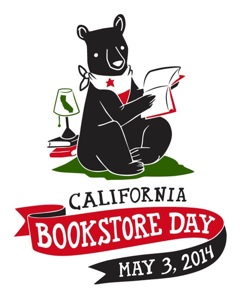 Enthusiasm is revving up across the Golden State as bookstores prepare to celebrate the written word and the culture of independent bookstores on California Bookstore Day, May 3, 2014.

To welcome customers into their stores on California Bookstore Day (CBD), independent booksellers will be offering special giveaways and limited edition, word-based items developed by publishers exclusively for the event. CBD producer Samantha Schoech has been working tirelessly with publishers and authors to develop these items.

At the Northern California Independent Booksellers Association trade show last week, Schoech revealed the first of the limited edition, word-based items that will be available for sale at independent bookstores on CBD.

“We were very gratified by the response at our trade show. At the meeting, when we gave our first peek at possible items, there literally were gasps in the room,” said NCIBA’s Executive Director Hut Landon.

The full catalog of items is scheduled to be available on the newly launched CBD website by the end of October, and booksellers will have until November 15 to complete their order forms.

“We’re doing this early enough because we’re sort of inventing the wheel here. We’re leaving a lot of room for production, distribution, publicity, and all the things that need to happen in order to make this work,” said Schoech.

More items will be added to the list of options in the coming weeks, including special pieces from big-name authors, items for children, and promotional giveaways. “Publishers have really come through for us,” said Schoech.

Though they won’t know exactly how many bookstores are joining in the celebration until the orders start coming in, Schoech is anticipating between 100 and 150 participants. Stores that sign on to participate must not only pledge to promote California Bookstore Day and celebrate it to the fullest, but also to reserve the specially made items to sell only on CBD and only in stores. 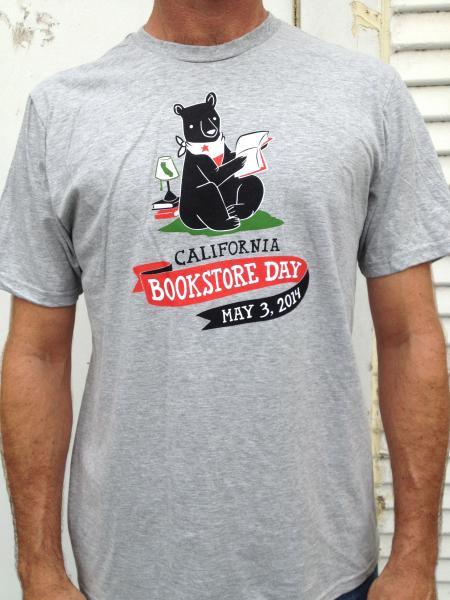 The CBD table at the NCIBA and SCIBA trade shows drew quite a bit of attention. Schoech and Landon were thrilled with the support from booksellers and others visiting the table, where tote bags, T-shirts, and stickers branded with the CBD logo were for sale.

CBD merchandise, which is available for purchase by individuals and for resale by bookstores, will help bring attention to the event as well as raise a bit of extra financial help for the movement. The event’s first fundraising campaign on Indiegogo is helping to finance the work underway now and a second campaign is planned for this winter.

Marketing of CBD to the public is expected to ramp up after the holidays. “We haven’t turned our faces public to start making this known yet; it’s been sort of an industry thing thus far,” Schoech said. “In the new year is when we really need to start building excitement at the customer level.”

Come 2014, booksellers are encouraged to sell the bags, T-shirts, and stickers in their stores and to share information with their customers about California Bookstore Day, the special items available, and the events planned to celebrate independent bookstores.