Indies Host a Week of Celebrations

"This year, the buzz around Independents Week preparation and celebration has been palpable," said Jennifer Rockne, director of the American Independent Business Alliance, the event's sponsor. Whether they hung a Declaration of Independents poster in the window, sponsored a favorite indie bookstore contest on Twitter, or conducted a shopping challenge encompassing several towns, booksellers reported that Independents Week, which ran from July 1 - 7, generated both goodwill and sales.

The number of participating bookstores and other indie businesses has jumped significantly since Inkwood Books in Tampa, Florida, held the first Independents celebration in 2002. "Just do a Google news search for 'Independents Week' and see what happens!" said Rockne. "Participants, whether local groups or individual businesses, embraced the opportunity to bring citizens and local independent business owners together in a variety of ways. Many adapted our new poster, button, banner, and other designs for local use. Several business owners sent us print ads that included mention of Indie Week along with data from economic impact studies. This repetition is so powerful -- when an Independent Business Alliance and its members are saying the same thing."

Rainy Day Books in Fairway, Kansas, and the blog my3books.com partnered to celebrate all independent bookstores this Independents Week by giving indie fans a chance to proclaim their love for their favorite bookshops in a contest on Twitter (with the hashtag #RDB714). Five winning bookstores will receive a complete autographed hardcover set of the Twilight Saga by Stephenie Meyer.

Rainy Day Books is sponsoring the contest, but the store's Geoffrey Jennings asked Abraham Associates publishers rep John Mesjak if he'd put the details on his My3Books blog. "I didn't want the contest to focus on our bookstore," Jennings said.

Jennings chose Twitter as the platform because of its succinct "real-time" feedback that was ideal for creating a conversation exploring the question "why do people like their independent bookstores?" He also wanted give others the ability to start their own conversations. "I wanted to steer people back to their favorite indies, not us." To be eligible for a prize, bookstores must participate in IndieBound. (Details are available at www.my3books.com.)

In Holland, Michigan, eight-month-old Tree House Books joined neighboring businesses belonging to the Lakeshore Independent Business Alliance for a busy Independents Week, recognized by two mayoral proclamations. Area residents were invited to "Take the Indie Challenge," which made a contest out of shopping at local independent businesses. "We printed out cute postcards that said 'Take the Indie Challenge,' and we had more than 100 people participate," said Tree House Books owner Michele Lonergan. The bookstore and other local businesses provided two baskets full of giveaways, one for the customer who spent the most at indie businesses and the other for the customer who shopped at the most indie stores. 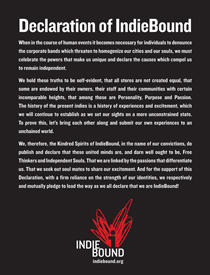 Lonergan said the events generated press and goodwill. "People are starting to use the terms," she said. "Now a customer comes in and says, 'I'm shopping locally first.' There's a real growing awareness."

Caroline Green, children's book buyer/community events coordinator at Malaprop's Bookstore/Cafe reported via e-mail that the bookstore "spearheaded the first (hopefully) annual Independent Retailer Week in Asheville, NC!" Malaprop's worked with other local retailers to host a series of promotions, including a raffle and T-shirt Day (anyone who visited a business wearing a T-shirt promoting any of the participating businesses received a free gift). A free T-shirt was given to customers who spent more than a certain amount at a participating business. Businesses also featured a table/display with business cards, fliers, and pamphlets promoting the other participants.

"The response (at Malaprop's, anyway) was wonderful!" said Green. "Lots of people participated -- whether they were meaning to or not! There were a number of local people who wanted to be more active in future celebrations, and other parts of town that would like to participate. I hope that next year we will at least double the number of participating businesses -- there are lots of indie businesses here that recognize this kind of unity can only increase awareness in the local and tourist communities. It is essentially free advertising -- with a cause!"

At Country Bookshelf in Bozeman, Montana, Mary Jane DiSanti displayed a large IndieBound Declaration of Independents poster in the store window and talked to people as they came in about what being an independent means. "We explained what we do as an independent bookstore," she said. "Each book is hand chosen by one of us. The store reflects all of our choices of books we know and like, and what our customers are asking for."

In Naperville, Illinois, Anderson's Bookshops is celebrating the first IndieBound Naperville Independents Week from July 6 - 12. Coordinated by the IndieBound Naperville organization, the celebration features activities and promotions and includes nearly 100 stores, services, and restaurants, which will ensure the week will "take off in a big way," said Anderson's Candy Purdom. "We've been spreading the IndieBound word for a year now, but to have an entire week devoted to this message adds to our enthusiasm!" 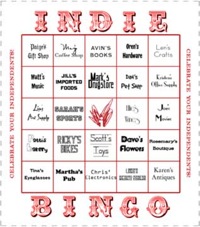 Activities include a blood drive, the Indie Challenge bingo card game, an Independents Celebration Parade, a sidewalk sale, a block party, and an IndieBound Tax Holiday, where shoppers who ask for it get a 7.25 percent discount.