Ci6 Education: Expanding the YA Audience

The June 20 panel — titled “Expanding the YA Audience — How to Market YA Books to Adults” — was moderated by Javier Ramirez of The Book Table in Oak Park, Illinois. The panelists were Jordan Standridge of Powell’s Books in Portland, Oregon; Emily Lloyd-Jones of Gallery Bookshop and Bookwinkle’s Children’s Books in Mendocino, California, and author of The Hearts We Sold (Little, Brown); Destenie Fafard of Cellar Door Books in Riverside, California; and Kim Brock of Joseph-Beth Booksellers in Cincinnati, Ohio.

The panel began with a discussion of what exactly YA is. “[It] isn’t so much a genre as it is a targeted audience,” said Lloyd-Jones, explaining that YA books can blur genres and are typically concerned with themes of self-discovery. “Discovering who we are is a universal process that goes on our whole lives. I think teen fiction, since it goes so heavily into those [themes], is something that adult readers can and should read.” 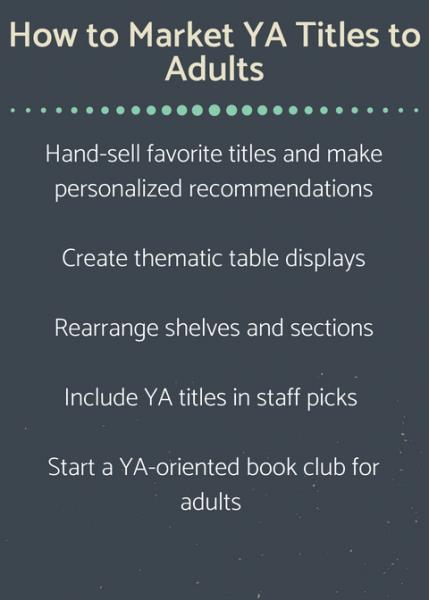 Standridge noted that YA fiction addresses social issues and current affairs in ways that adult titles are not always able to. Recent popular YA titles deal with issues such as gentrification, the criminal justice system, and sexual assault.

Despite young adult books having universal themes and exploring relevant topics, the panelists agreed that there is a stigma regarding adults venturing into the YA section. “In order to fight that stigma, we have to understand why there is a stigma in the first place,” said Lloyd-Jones. “YA is stigmatized because it is a genre written mostly by women, edited by women, and enjoyed by teenage girls and women. Society often derides things that teen girls like.”

“A lot of boys stop reading or don’t read as much as girls when they get to high school,” Standridge added, noting that hand-selling and promoting YA fiction is the best way for booksellers to get overlooked or stigmatized titles into the hands of readers who might not have picked them up otherwise.

One effective way to hand-sell a YA title is to lead with what the book is about instead of its classification. The panelists each said that when handselling YA titles, they sometimes omit the fact that it’s YA, or mention it at the very end of their recommendation.

“I look at the theme of the book. One of my favorites is Victoria Schwab’s This Savage Song (Greenwillow Books),” said Brock, adding that she discusses the more mature themes in the books as a way to engage her customers. “Just look for a theme that would appeal to adults.”

Another way to engage adults is through book clubs. At Cellar Door Books, Fafard hosts the Not Your Father’s Teen Lit Book Club, which selects YA titles like V.E. Schwab’s A Darker Shade of Magic (Tor Books) for adults to read and discuss each month. YA titles can also be integrated into other book clubs as well; Cellar Door Books’ Current Affairs Book Club has read The Hate U Give by Angie Thomas (Balzer + Bray).

YA book clubs can also be oriented toward a wide range of ages as well. Powell’s Books has a longstanding YA book club that mainly attracted teen readers, but recently it has garnered the interest of readers and writers in their 20s, some of whom are looking to hear teens’ opinions on YA fiction.

Standridge, who was worried that the disparity in ages might impact the group dynamic, said, “I’ve found that the kids actually like having the older people in the group because it makes them feel kind of mature.”

Having their opinions about a book listened to by an adult can boost a teen’s confidence in their intelligence, said Fafard, which, in turn, can encourage them to keep reading.

“It’s important for high school kids to have a dedicated space that they can feel comfortable in,” said Standridge, adding that it’s now easier for adults to enter the section as well. Powell’s has also added a display just outside its kids’ section that features YA bestsellers, another way that readers of all ages can be exposed to popular titles.

Lloyd-Jones added that separate YA sections can be useful. At Bookwinkle’s Children’s Books, there is a teen nook located in the back of the kids’ section. “A lot of people will go back there because there’s a sense of privacy...and we have seen sales increase since we’ve started that.”

At Joseph-Beth Booksellers, the YA section can be found right next to the essays and literary criticism section, which is another way that bookstores can legitimize an adult readership for YA fiction. Brooks said that placing the two categories near each other creates a progression that seems natural; adults browsing the essays can move right into the YA section without a hitch.

Ramirez mentioned that the Book Table has also started to integrate YA titles into its staff recommendation section, a practice that the other panelists’ stores have taken on as well. Since doing so, the Book Table has seen a large increase in sales for not only the recommended books, but others by the same author or the next book in the series.

Through thematic displays, booksellers can use merchandising to promote YA fiction. At the Book Cellar, Fafard arranged an Afrofuturism section that included Children of Blood and Bone by Tomi Adeyemi (Henry Holt and Co.) and Black Panther by Ta-Nehisi Coates and Brian Stelfreeze (Marvel). Fafard added that there’s a “whole segment of YA right now that is the black speculative movement, so do a display and see how that goes.”

Regardless of which titles booksellers choose to promote, the panelists urged them to be passionate in their promotion by offering detailed, personalized recommendations that appeal to universal themes.

“When you’re looking the person in the eyes and speaking to them about why a book is amazing, you’re much more likely to make a connection with them,” Standridge said. “And they’re going to take the chance and read the book.”